40 years of It Must Be Love 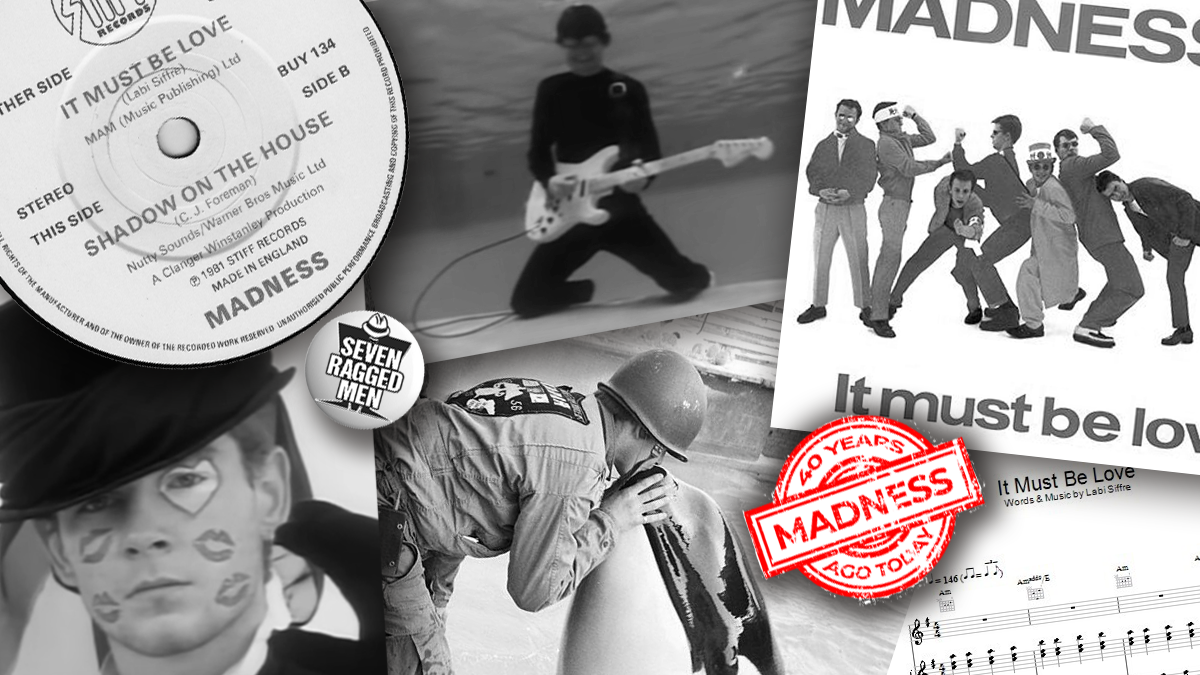 LEE: Mike originally came up with the idea of covering It Must Be Love.

MIKE: It was a really good live number, so I thought it would be good to record it – I knew it would suit Suggs’s voice.

WOODY: Mike came in and said, ‘I really think this would be a good song to do.’ He seemed to think a lot of the band members knew it, which they did, but I’d never heard it in my life.

SUGGS: He said he’d heard the Labi Siffre version on the radio so we spent some time trying to learn it.

LEE: We had a go and it worked well in rehearsals, so Robbo said, ‘You’ve got to do it; it has to be a single.’

DAVE ROBINSON: Mike had come up with it in rehearsals and they’d played it a bit, and then they did it as an encore at a couple of gigs. I went up to the show in Sheffield and heard it and thought, ‘What’s this? It’s fantastic – it’s a smash record.’

SUGGS: At first we couldn’t quite believe it was for us, as we were so sarcastic, but it ended up with a Madness vibe.

DAVE ROBINSON: Because it wasn’t by a ska artist, they hadn’t really considered doing it. It took a slightly different type of argument to convince them it would be a good idea.

WOODY: I’m glad I hadn’t heard the original when we played it as it might have influenced me and I might have changed my style. As it was, I played it with a completely open mind and it became one of ‘ours’.

BEDDERS: Originally we were going to record it for a Richard Skinner Show session but we didn’t have time to work it out. So we decided to play the song on the British tour in the Autumn of 1981 and it became a firm favourite.

LEE: Some of the boys were against doing it because it was someone else’s song but Robbo said, ‘Look, if it doesn’t go to number one you can have my record company.’ So we shook on it. And we’re still waiting.

DAVE ROBINSON: The truth is that I said to Mike, ‘We must record it – it’s a potential top five song.’ And, of course, he said, ‘Well, we’re just taking your word for that aren’t we? What happens if we record something we don’t like and put it out as a single, just on your say-so? I don’t think it’s gonna be top five at all.’ So I said, ‘Well, if it’s not top five, you can have Stiff.’ And he said, ‘Right. It’s a firm bet. We’ll shake hands on it.’

Madness start recording the song on October 25 1981, in the middle of their UK tour.

BEDDERS: On a very cold Sunday, the Madness touring party, fresh from a gig in Bridlington, pulled up outside a very small terraced house in the back streets of Durham. We met Clive Langer and Alan Winstantly standing outside and expecting the unexpected we ventured in. We found a tiny living room with some microphones scattered around the floor… my God! It was a recording studio!

SUGGS: Robbo was so eager to release the song that he’d booked us into a studio mid-tour to record it.

BEDDERS: Nine hours later the backing tracks were finished. Clive sorted the pizzicato strings and Woody and I did most of the arrangement, working out the whole song between us to give it some dynamics and shape. Our style was so well developed by then that it just fell into place.

CLIVE LANGER: We had the strings play pizzicato, ‘plink, plink, plink’ which at that time required real musicians. It was quite an experiment and you took a lot of responsibility because you had to pay the bill. Now you can just use a sample.

SUGGS: We finished off the rest of it in London later.

The single (BUY 134) is released exactly one month later, on November 25 1981, accompanied by a classic video. The B-side is Shadow on the House, written by Chris.

LEE: I came up with the idea of a funeral setting for the video. Whenever there was a black comedy movie on at your independent cinema, I was along to see it; Arsenic and Old Lace, Entertaining Mr Sloane and The Anniversary – films like that. Maybe that’s why.

BEDDERS: The video also saw an appearance from Labi Siffre himself, who gave his blessing on our version, and was heard to say he’d like to do one of our songs. Oh, and Lee played the bee and Woody played the bird.

LEE: That was the final straw altogether. Dave Robinson was wandering around giving people costumes, and I was just thinking, ‘What am I in for now?’ Then he says, ‘And you’re the bumble bee Lee’. I just thought, ‘Right, that’s it! This is the last time I’m getting suckered as the idiot’. Of course the video was great – it was the business – but Christ, a bumble bee?

CHRIS: Originally, I wasn’t going to play guitar in the swimming pool. Lee wanted to be underwater, so he tried jumping in this pond, but it didn’t look very good. So we went to this hotel and I was just going to stand on the side while he went under. Then I thought, ‘I’ll go in with him.’ The only problem was, the guitar kept pulling me up as it was wooden, so I put two lead diving weights in my back pockets and they nearly dragged me under. It was touch-and-go whether I’d get out – I thought I was gonna die.

NIGEL DICK (Stiff press officer): When the guitar came back from the shoot there was still water inside. We were horrified because we’d rented it.

CHRIS: Dave Robinson desperately tried to dry it with a hair dryer but the neck was really bent – it was ruined. We sent it back but the rental house said, ‘The neck’s like a banana’, so Stiff had to buy it. It subsequently appeared in a lot of Stiff videos with other acts and also on Top of The Pops

NIGEL DICK: It lingered in a cupboard for months if not years. I eventually plucked up the courage to ask if I could use it and was told I could keep it.

LEE: In the end, the video was one of my favourites because of the basic storyline and the simpleness of ideas coming over strong on film.

CARL: I like Lee in the grave scene. And I like myself running in front of hearse, which I thought was quite funny.

SUGGS: The image that sticks in the mind is when we’re all dressed in black in the white studio.

CHRIS: We’d got some black turtle neck jumpers to go on The Little & Large Show and I thought they were quite good, so we wore them for the video too. It’s what you call ‘styling’ these days, which costs a fortune.

The single climbs the UK charts to eventually peak at No4, and becomes a staple of the Madness set that endures to this day.

WOODY: It’s still my favourite Madness song because of what it does to people – it transcends a lot of things. It’s the one song that always gets everyone going and that will melt even the biggest hardest skinhead into a puddle. I mean, when you see big old fat skinheads saying ‘I love you’ and half-crying, hugging people… that’s worthwhile. There’s a lot of love in the room when that song is being done; it just kinda dissipates all the aggression. It’s always pathetic but lovely really.

SUGGS: Even though we didn’t even write it, it’s turned out to be a bit of a theme song and a snapshot of people’s lives. I have very distinct memories of playing in London and seeing huge, quite intimidating blokes with tears in their eyes mouthing it word for word. It is such a simple sentiment and yet so often the best pop music is. It’s so simple, really, so stupid. But if it was that stupid, it wouldn’t work. I see big fat blokes in T-shirts that don’t come down to their belly buttons, crying, with their kids on their shoulders. That’s what matters. It’s a pretty naive view of things, but when you get a bit older like me, you do realise that love is indeed the best, and that’s what the song says, and people really love it. It’s been played at weddings, funerals, birthday parties. Especially when we play live, it might be the first record they met their girlfriend to, so it has memories people and it always goes down really well. To see bald, fat 50-year-old skinheads crying with their kids… there’s something charming about it.

WOODY: The original was great but a little too wishy-washy for my liking. No disrespect to Labi Siffre, but if you listen to our version and then his, they’re worlds apart. His is very light and skippy – we gave it a bit more weight. When I listened to the production years later I thought, ‘Wow. Did we really sound that good?’ It was stunning stuff for its time.

ALAN WINSTANLEY: Trevor Horn told me that he nicked the pizzicato strings idea from us for the first ABC record – that was quite flattering too.

When the video is later shown on Top of the Pops, it’s preceded by a warning not play electric guitars underwater.

CHRIS: They said, ‘This is dangerous.’ As if some kid is going to buy an electric guitar, plug it in and jump in his bath. On the same show, Shakin’ Stevens is singing This Ole House and jumps off a flipping roof! Now I ask you, what’s a kid more likely to do?