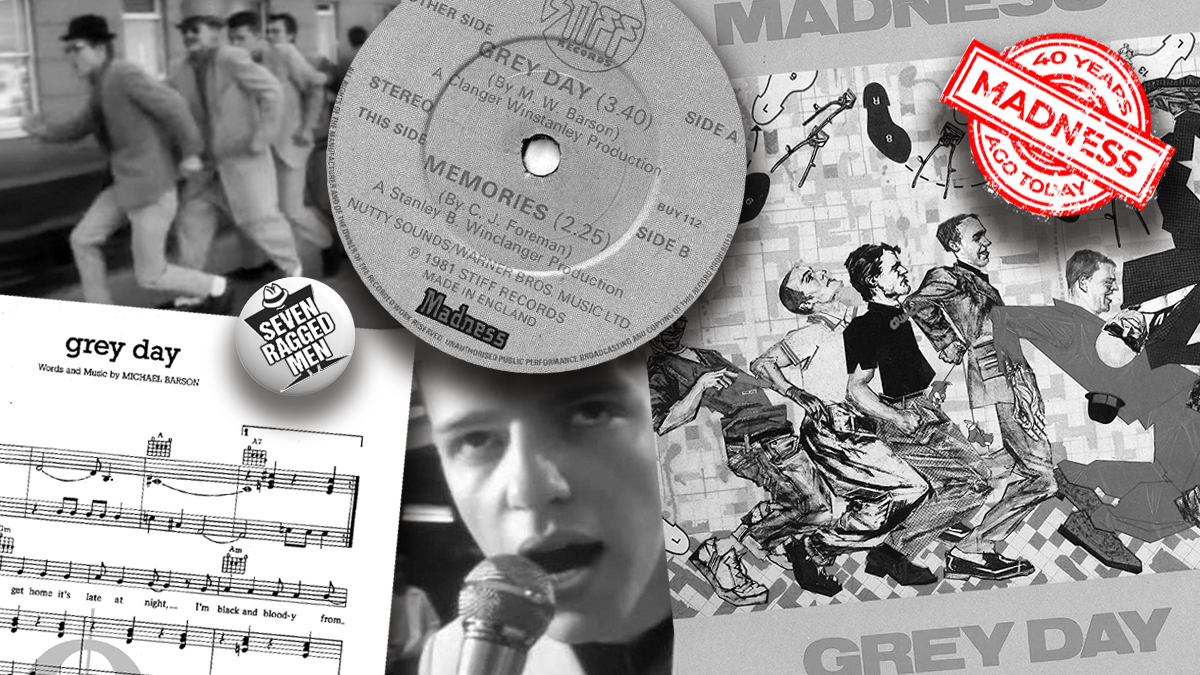 Posted at 20:45h in Uncategorized by iainm31

The band’s eighth single was released on 17 April 1981. Written by Mike, and with classic Chris lament Memories as the B-side, it peaked at No4 in the UK charts as the band hinted at a new direction.

CHRIS: We had first done Grey Day three years before; a ’60s psychedelic thing with no structure and only a few lyrics.

MIKE: We used to do it when we first started but it was a lot different then – a bit like Roxy Music’s Bogus Man. It had a really steady bassline and loads of echo on the saxophone and was really just a lot of doomy stuff strung together. We had this echo machine that Lee bought quite cheap and he was doing a lot of heavy breathing and percussion in it and it sounded really good. We only did it live once, at a gig in Notting Hill. But Bedders didn’t like it because he thought the bassline was too simple. And then somewhere someone forgot something so after a bit of discussion it was dropped.

SUGGS: It was something that we had knocking around for years but never properly finished. And then we sort of revamped it at rehearsals one day and it sounded quite effervescent.

MIKE: We tried doing it again in a different way and it sounded really good straight away so we completely re-did it and recorded it. Luckily I still had the lyrics on a scrap of paper or you would never have heard it.

WOODY: It was reworked from the early days with the new version more influenced by the Linton Kwesi Johnson album Dread Beat An’ Blood. It was our attempt at dub reggae. Madness were not great reggae artists, but we played it in our own style.

BEDDERS: Grey Day is very important because it’s the first change really, away from the early success – it’s something completely different. I don’t know if matured is the right word, matured always makes me think of cheese, but it was a really good point along the way. We made a breakthrough and it just had a denser, heavier sound to it, which was good.

SUGGS: It was a definite step on for Madness. I remember going to a club with a copy of it and Joe Strummer was DJ’ing. I asked him to put this on, because I thought I’d finally done something that he could dig, not just jumping up and down, but he wouldn’t play it.

CHRIS: For the video, we stood playing in a shop window in Bowmans in Camden High Street, while a bemused crowd gathered outside. (Bowmans used to occupy the whole block, but due to economics it’s now much smaller). Bedders looks well pissed off because we’re wearing grey make-up, which he didn’t want to wear. It never really showed up on the finished film anyway. But it did show up that he was sorely miffed. Ha ha!

MIKE: Robbo was also worried it was all looking a bit doomy, so we had to have a little bit of sunshine in there too.

CHRIS: He was also trying to build Suggs up as some sort of sex symbol, so he put him in a bed. Suggs wanted to wear pyjamas but Dave was like, ‘No no…’

DAVE ROBINSON: This video was a little more serious and a less slapstick, and also nearly a minute longer than the others. It had a slightly sombre feel but I enjoyed it a lot – we had to do a lot of setups in the shop window. There was a lot more to do and it was probably one of our more professional videos.

SUGGS: With songs like Grey Day, we were definitely starting to change musically and lyrically. But it was ironic, cos we’d always had those elements of darkness, it just started becoming more prevalent.

WOODY: We did have a lot more depth than just the y’know, the polished turd as it were – us jumping around. We were more than just a boy band.

CARL: We stuck to our guns. We always tried to tell people that we weren’t ska. If no one had ever heard our stuff, we’d probably have been stuck with the ska tag but luckily, we’re popular so people did get a chance to listen to our records and they could see for themselves that we had lots of different influences.