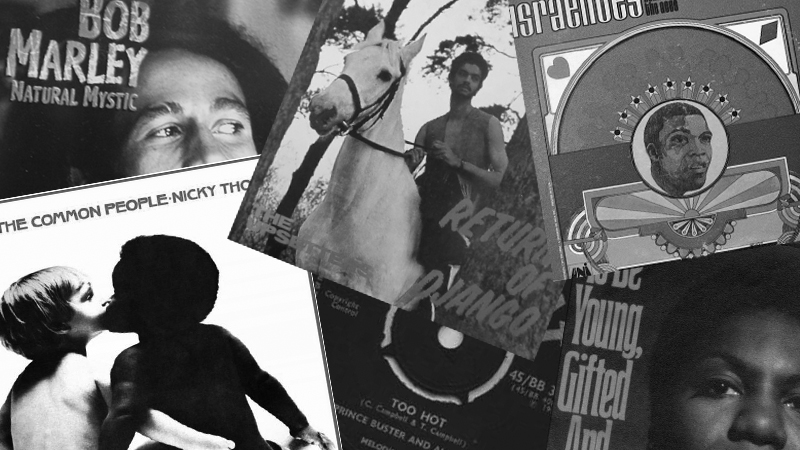 Posted at 18:43h in Uncategorized by iainm31

1 / Bob Marley, Natural Mystic – I originally got this phenomena on cassette whilst travelling in Cornwall on hols. It stayed in the car cassette player for all that summer and beyond. No filler, all winner. Every song made the open road less monotonous. The intro to Natural Mystic drives with the listener. I played this on vinyl comfortably loud today, it pounds you into rhythmic submission. It’s not one to listen to digitally, I personally feel. Bob Marley’s finest production hands down.

2 / Desmond Dekker, Israelites – And the Aces, on Pyramid. Could not understand a word but the almost Doo Wop backing and guitar plucking got my pocket money that weekend. Great production by Dacres Kong. This was the first reggae single I purchased and I used a neighbour’s record deck to play it on initially. I think this may well have been the first time I had heard a reggae tune over the airwaves.

3 / Lee Perry AKA Leader, Return Of Django – The man who wrote the reggae bible. His production is quite simply ‘out there’. The first sax solo I ever learnt when acquiring one. I travelled far and wide for this – Acton in fact on a No70 bus, Red Rover. There are classic cock-ups in the recording but he soldiers on, time is money etc. There is a rather squeaky sax solo that is priceless to me. On trying to get that squeak, it nearly cost my mum and dad our council house prior to the noise pollution act.

4 / Jimmy Cliff, Wonderful World, Beautiful People – Optimistically titled, not a favourite but this hopscotches along in the park. A cautious message that we should all club together. It’s timeless, just change the names of the leaders of the day – in this case Wilson, Nixon and Pompidou – and every little bit helps. He is a unique lyricist, the best with, I might add, The Order of Merit.

5 / Boris Gardiner,  Soul Serenade – Simply the best reggae instrumental cover ever, a song for sun-drenched lovers, sipping in the shade of an old palm tree. Written by the late great King Curtis, who played many sessions with The Coasters, a massive influence on my style.

6 / Prince Buster, Too Hot – I found this track in the basement of an Islington junk shop on Upper Street, on the FAB label, for 5p I believe. The Specials played this on the 2-Tone tour in 1979. They did a version that speeded up into a frenzy for what seemed a very long time and that the crowd danced crazily along to. I found this to be the most economic way of keeping warm in those Thatcher years.

7 / Max Romeo, Wet Dream – Listen to the intro to this track; it’s the best rim shot ‘thwackety thwack’ in snare drum history. Only a second in length, but raised the hair on the back of my neck(s). Banned by the BBC after a few plays, it went on to become Pama Records’s biggest selling track (250K). There was outrage when the fuddy-duddies at Broadcasting House let this slip through the net. It made the Top 10 and you were able to get it via radio Luxembourg 208 on a Solid State transistor radio. Titter ye not!

8 / Toots & the Maytals, Take Me Home Country Roads  – Soulful intro. This is the voice and what a voice for such a little bloke. I met him at a gig I did in Finsbury Park when he asked me for a cup of water for his daughter, who was his backing vocalist. He thought I was security but I thought, ‘On the contrary.’ I asked for a few tips and he mumbled something about feeling it, the pressure and ‘do the reggae within your jeggae.’ Toots is the dulcet tones, his music is all summer and year round. Period.

9 / Bobby Blooms, Montego Bay – Freddie & The Blue Notes’ cover of this had summer written all over it. However, Bobby Blooms cut tips the scales for me in the soulful vocal and tempo department. Close your eyes and he could be a native Jamaican singer. Check out the video for BB’s Montego Bay on the tube.

10 / Nina Simone, Young Gifted & Black – Bob and Marcia gifted this to me as I roller skated the boards at Ally Pally around 1970. This, I found out recently, was written in two days by the great Nina Simone and Weldon Irvine in ’68. Two days! Start to finish! An all-time favourite. Only heard the Nina Simone version recently and also learned this was a civil rights anthem. Right, where’s those skates…

11 / Nicky Thomas, Love Of the Common People – ‘Tears from your little sister / Crying ’cause she doesn’t have a dress without a patch, for the party to wear.’ Absolutely chokes me up every time I hear Nicky’s version. Excellent string arrangement that gently tugs at the emotions.