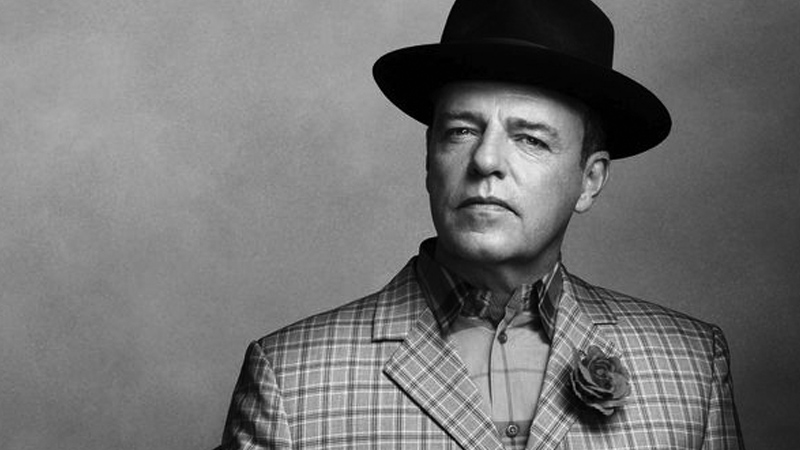 As a kid I had this idea of what I wanted to look like and it hasn’t really changed. People say, ‘I saw a picture of me in the Seventies and it was so embarrassing’ but I haven’t got any of those pictures. I knew then what I liked and I know now what I like – and passing fashions haven’t changed my mind. I grew up in the Sixties and I remember seeing gangsters such as John Bindon and actors like Terence Stamp in Soho in these fantastic Italian style suits. Ever since then I’ve aspired to that standard.

In the early days, the crombie over-coat was the thing you saved up for. But I had to wait until 1978 to get a proper one from a second-hand gentleman’s outfitters in Brick Lane, and I’ve still got it. It probably cost about 50 pence. Since then, it’s been around the world. It’s been chased, kicked, kipped in and was on the front cover of the Absolutely album. My wife thinks it looks like s**t, so I have to keep retrieving it from her Oxfam box and hiding it. I remember all the bad boys at school wore brogues, and they used to nail metal ‘blakeys’ into the tips of the sole and heel. The click-click of the metal-tipped brogue was an ominous sound.

When Punk came along, I realised you could dress like Sean Connery in Goldfinger if you wanted to. I love a pink suit. I had it made for me by Timothy Everest and wore it when we played David Bowie at Anaheim Stadium in California. Bowie came and said hello to us before the gig and, coincidentally, he was also wearing a pink suit. So he decided to change his outfit. When we went on stage, I got a bit excited and fell about 40ft, landed on my coccyx, ripped the seat of my trousers and looked up to see Bowie laughing his head off at me. I had gone from the heights of playing to 70,000 people and having Bowie change his suit because of me to that.

We used to wear bowler hats in the Seventies, and the hippies would all look at us as if we were mad. I’ve always had a penchant for a bowler. Think John Steed in The Avengers, Steve Harley in Cockney Rebel, Malcolm McDowell in A Clockwork Orange and of course, the City gent.

I like clothes and I’ve got quite a lot of them now. I must admit money helps – despite that, Dr. Martens will always remain somewhere at the bottom of my wardrobe. They don’t hold the same glamour now as they did when I couldn’t afford them – but that first pair of DM’s, that was the transition from a kid to a teenage hoodlum. It’s the same with Levis, you had to nag your mum  because they were expensive. The things I most remember are the things I couldn’t get for ages.  Buying a pair of Levis was an important stage in growing up.  Apart from those, just about everything I’ve ever bought I’ve looked back on and thought, ‘Why did  I wear that?’ I remember being really excited about a pair of bottle green baggies that were truly  astronomical. I had a tartan suit that shrunk about three sizes. It may have looked funny but it certainly didn’t look good. Sometimes I worry about myself.

Clothes getting ruined is one of the worst things about being in a group. Over the last two years I’ve probably had 30 or 40 suits, but I’ve only about 15 of them left because they get lost or nicked or trashed by dry cleaners. When you’re on tour your clothes are being cleaned all the time, and dry cleaners are my biggest hate in life, people who knacker good clothes for a living.  Suits are my thing really, suits of varying shapes and sizes. We usually get stuff made, and I’ve tried a few different tailors, but now I’ve got a really good one. Charlie Alien in Highbury is excellent, he’s a fairly young black bloke who actually understands what I’m talking about. Usually you need a translator to talk to tailors.  I have to get suits made because I can rarely find second-hand clothes to fit me. I love second-hand shops because everything’s a one-off, but everything in them seems to have been made for short fat people. Americans have all got big waists and little legs. If jackets fit me, the trousers never do, everyone my height is four foot wide.

It’s handy having a good tailor, I like the idea of going to the same shop for years. There’s Holts in Camden Town where all the band have always bought their Dr. Martens. The old bloke in there knows us all, and they do really good brogues. There’s also Snips which is the best barbers in the world. It’s in Colney Hatch Lane, and I hate going there because it takes hours, but Nastasie is simply the best. He’s chichi’ed his image up a bit lately, but he’s still a great barber.  I constantly think about changing my hair, but I don’t know what to do with it. I occasionally grow it a little, but that’s as far as it gets. It’s annoying because everybody’s got a flat-top now, I think that’s the one way that Madness have influenced fashion. But there’s a certain dodgyness about people who’ve just had their hair shorn into a flat-top. In fact that’s another of my hatreds – dodgy flat-tops. Oh, and gold, I hate gold! I wear a wedding ring but I don’t like jewelry, and I don’t like this belt either. I’ve worn the same belt for the last seven years and I don’t even like it, but you just can’t get good belts. They do a good belt in Americaland, but it’s a bit too big.  That’s the worst thing about shopping, you can never actually find anything, there simply isn’t anything about. Like good straight trousers, you just can’t get proper straight trousers.

I don’t like  shopping, it’s a bit difficult for me to go to the really busy places like Oxford Street, but then again there are benefits to being a pop star. Shop assistants tend to treat you well. I suppose it’s because they know you’ve got a few bob in your pocket.  Sometimes I buy things for the missus, but her taste is so diverse that I have to be pretty sure about what I’m buying. My wife likes to think she’s made me branch out a bit – she used to call me Val Doonican, I’m a pretty conservative fellow. There’s something about being square that I really like, it’s subversive.  Basically, my taste hasn’t really altered much. I started in this band as an irresponsible teenage numbskull. I’ve just got older. I don’t dress aggressively for the sake of it anymore. Actually, I’ve always got a lot of my style from going to football – I’m going to start going to football again.