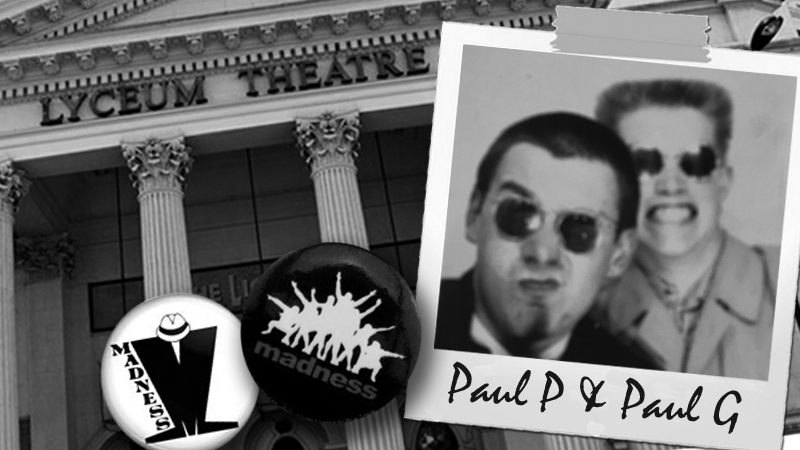 Posted at 16:33h in Uncategorized by iainm31

Ladieeeeez and gentlemen! Roll up, roll up for the greatest show on Earth. London’s Lyceum theatre proudly presents for one night only…The Madness Christmas Party!!!

It is the year of Our Lord Upminster 1983. Accompanied by my new mate, Paul G, as uber-fans of Madness, we had decided to get to the venue nice and early in the vain hope we might meet our heroes and nab their autographs.

Paul G was ‘Suggs’ to my ‘Chas Smash’. Our paths first crossed at a caravan park disco called The Quarterdeck in Selsey Bill (the Sussex seaside town famously name checked on the Madness’ single, Driving In My Car and in Saturday’s Kids by The Jam too).

On a night out there, I’d usually be attired in a tonic suit, a pork pie hat and jet black wrap-a-round ‘walk into the Ladies toilets by mistake’ shades. Whenever the DJ spun a Madness single, I’d rush to the dance floor and attempt Chas Smash’s ‘Nutty Dance,’ often attracting a ring of revellers warmly cheering me on.

I was a 17-year-old would-be comedy actor who just needed a platform to perform. The tiny, shoe-scuffed, lager-drenched, flashing-draughts board of The Quarterdeck was that very platform.

And it was one fateful Friday night that this fellow Madness clone suddenly emerged from the fog that was farting from the dry ice machine. He was dressed in a sharp grey suit, a flat top you could place a spirit level on and sported a pair of round black-tinted specs. The opening snare drum beat of House Of Fun burst from the speakers.

Together, we blindly moon-stomped, skanked, ran on the spot like hamsters, bounced back and forth and accidentally head butted each other. Crack.

It must be…Kismet? Paul was a pretty nifty dancer; favouring the jerky ‘Suggs’ approach that complimented my ‘Chas Smash’ swagger. The crowd went nuts and for a short while, this couple of young show offs believed they were a ska version of The Two Ronnies. The Two Pauls.

The train whisked us away from the mean streets of downtown Chichester to London’s The Strand (‘ave a banana) and on arrival, we gazed in awe at the proscenium majesty of the Lyceum Theatre. Sadly, this magnificent 19th century building no longer acts as a rock venue. Today, you’d probably get thrown out for crowd surfing during a Lion King matinee.

The ‘Two Pauls’ stood shivering by the stage door. My old ‘crombie’ overcoat (I won’t dignify it with a capital ‘C’) was never much cop in winter. It was one of those cheap jobs purloined from Petticoat Lane market where all the buttons fell off after a fortnight and the red lining tore under your arms if you lifted them above chest height.

“Let’s go and stand by that other door,” I suggested, pointing at a security exit; hearing a slight ripping sound. We sidled up to the door and hung around for an hour or so.

Now, how often did country bumpkins like us, experience the bright lights of London? Where the streets are paved with… pavements. We could be in Virgin Records…Forbidden Planet comic shop…Wendy Burger! No, what are we doing? We’re just loitering on a street corner freezing our bollo…Hold on. Policeman giving us dirty looks.

A hairy man in a Motorhead T-shirt emerged from the door.

“Well, d’ya fancy ‘elping us blow up some balloons?”

Never had the inflating of a job lot of party items sounded so appealing. This was our window of opportunity. The roadie, in a spirit of misplaced trust in hooligan stereotypes and laziness, handed us self-adhesive silky AAA passes (none of your poncy laminates back then) and gave us the task of blowing up several hundred balloons with the help of one huge helium canister.

Privately, our lungs wheezed a sigh of relief. The balloons were to be secreted in a giant net up in the gods and released at the climax of the gig. After an hour of tying fiddly rubber knots (and suffering minor cardiac arrests when Paul G would over inflate the bloody things) the moment we’d been waiting for had finally arrived. The Nutty boys themselves!

Several members of the band sullenly drifted into the auditorium. We started trembling. Keep cool, Pauls.

Chas, Mike and Suggs went into quiet discussion, surveying the space and asking the roadie questions.

What?? I thought to myself. No tonic suits, no loafers, not even a fez! Where are Mike Barson’s omnipresent shades? I can see his actual eyes. This ain’t right. TRAINERS??? And they look so serious.

Chas Smash seemed a bit scary in the flesh. He tugged on his cigarette and glared over at us. Us. The Two Pauls, looking like a cheap off the peg version of Suggs and Chas Smash. We immediately felt very self-conscious.

“Alright lads? Thanks for helping out,” said Suggs, wandering over.

“We should get these two geezers to fill in for us tonight, eh Suggsy?” rasped Chas Smash.

He winked to reassure us but we both turned cherry red and sheepishly looked down at our Cherry Reds. Meanwhile, the sax player, Lee Thompson was busily inhaling from our helium supply and began impersonating Pinky & Perky in a squeaky voice. This act of daftness broke the ice and so we all had a gasp. I rather bravely sung a line of Chipmunks Are Go in contralto. Chas laughed. Phew!

After such larks of potential brain embolism, it was time for the band to soundcheck. They kick off with a run through of a new song we hadn’t heard before called Keep Moving and their current hit single, The Sun And The Rain. Chas Smash wants to sing his bass baritone backing vocal lyric (“low…”) several times and then…

I really didn’t anticipate the afternoon could be more mind-blowing, or indeed balloon-blowing, than this but then I spotted a huge camp teddy-boy usher a short hobbling figure into the auditorium. Immediately, Suggs and Chas Smash leapt off the stage to greet this gentleman. Now, Madness were my favourite band but Ian Dury was my god. Five minutes later, the great man lurched between us to inspect our handiwork. He shook our hands, muttered something about Flanagan & Allen, chuckled and then disappeared with Chrissy Boy to avail himself to hospitality.

A third band on the bill arrived to sound check called Bonsai Forrest. Unbeknownst to me, the guitarist transpired to be a future comedy hero of mine in the form of young Paul Whitehouse, who went on to find fame with TV’s, The Fast Show. Nigel Planer from The Young Ones also made an appearance.

(If I’m going to continue to vulgarly namedrop here, I also lent 20p to Dick Cuthell, the session trumpet player from The Specials for the payphone in the foyer.)

The hairy roadie wandered over to thank us for our efforts but it was coming up to 6pm. Gulp! We were supposed to meet my brother and his mates over an hour ago! Before we left through the tradesmen’s entrance, we were each rewarded two snow-white Madness Christmas Party sweatshirts. I used to wear mine with pride until I got too tubby and started to look like Mr Stay Puft from Ghostbusters. It kept me warm on the train journey home though and I still treasure it today, keeping it safe in a plastic box in my parents’ garage with some other mildew covered t-shirts.

Needless to say, it was the greatest show on earth.

I sat perched on my older brother’s shoulders at the finale, leaving him with a cricked neck and me, crushed nuts. It’s amazing how hundreds of descending balloons and confetti can make one forget abject pain. Chas Smash sung The Sun And The Rain line, “low…”, pitch perfect. He and Suggs, dressed in immaculate suits and shades, danced the night away on stage, bouncing around with complete abandon.