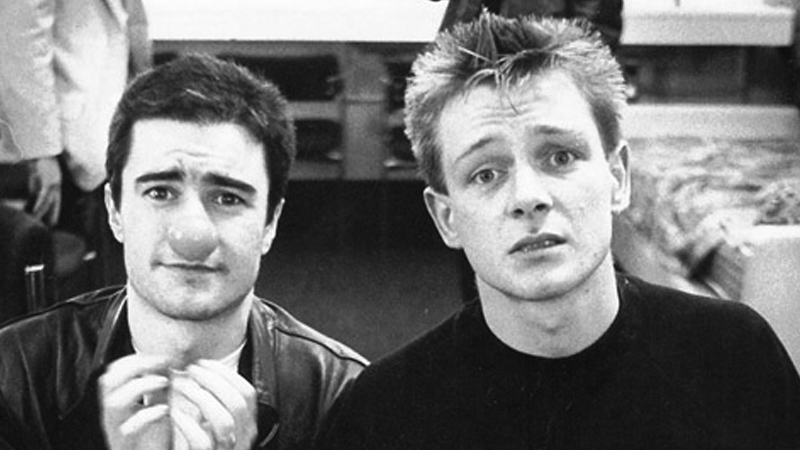 1. GUNS OF NAVARONE: The Skatalites
CHRIS: Absolutely classic ska, a Coxsone Dodd studio One production.  Everything about it is right – the tempo, the instrumentation, the  vocal noises, everything. It was a hit in England – it got in the  charts years after it came out in Jamaica, but it’s one of those  records that still sounds as good today.

2. DOUBLE BARREL: Dave & Ansell Collins
CHRIS: I remember when that came out, I knew it was going to be  number 1. It had everything a record should and it was fun.
CARL : A huge inspiration to us at the beginning of One Step Beyond,  that echoey voice with the ‘Hey you,don’t watch that watch this.’

3. SURFIN’: Ernest Ranglin
CHRIS: This was one of those kicking instrumentals, where, as well  as his lead guitar work, the guitar doubled up with the bass to  really lift the beat. There were quite a few like this around from  that period in the 1960s and I think Ernie Ranglin played on most of  them.

4. JESSE JAMES: Laurel Aitken
CARL: J-E-S-S-E James/Jesse James rides again’… a great pumping  beat on it, with all the ricocheting gunshots, really exciting.  We’ve been trying to rip it off for years.
CHRIS: And we’ve just about succeeded.

5. THE TEN COMMANDMENTS: Prince Buster
CARL : This has to go in because its so un-PC, talking about the rules  a man ought to lay down for his wife. My wife hates it. I can  remember a party once where all the men were up dancing to this  record and when it finished the women kept playing Sisters are Doing  it for Themselves.
CHRIS: Then there was another one to reply to it, The Ten  Commandments Of Woman , with the same backing track but just a different vocal. So that could go on too.

6. VAMPIRE: The Upsetters
CHRIS: I remember buying this one because I had no money , but had  to buy this tune. It was one of those wacky instrumentals that were  all the rage at the time. Boris Gardiner’s Elizabethan Reggae was  another. John Crow skank was the style, as it had plenty of organ,  like a bird flirting about. They used to play them up at the ice  rink we used to go to – when I hear this style now, I immediately  think of skating.

7. SWAN LAKE: The Cats
CARL: There was such a sense of fun about the reggae industry back  then. This was a time that anything that might be a hit was bashed out in reggae. Some of it made sense, but a lot didn’t. Like this  one, Swan Lake as a three-minute reggae number.
CHRIS: We used to do this tune and we’ve just started doing it again – it went down very well in America.
CARL: As soon as we started rehearsing this song, I came over all 1968 and 1969 again.

8. IT MEK: Desmond Dekker
CARL: This was a real youth club record. It was one everybody would  dance to, as it had that driving bass with the horns keeping it up  and you could sing along to it. There was enough of the lyrics that  everybody could understand. It was a perfect example of early reggae  that was just starting to gain a bit more substance.

9. SKINHEAD SPEAKS HIS MIND: The Hot-Rod All Stars and The Cimarons
CHRIS: Suggs had this. I’m pretty sure it’s off the Skinhead  Moonstomp album [it’s not – Ed], and that skinhead didn’t have  much to say. The tune had a cooking reggae beat, but the lyric was just one word “Skinhead…skinhead…skinhead”, over and over  again…classic.

10. MY BOY LOLLIPOP: Millie
CARL: My mum and dad were dancers and they showed me how to dance  to the hi-life, which came before this, and then when this came out  it broke the whole ska thing wide open and that’s what they’d be  dancing to. I remember it on our radio in the kitchen all the time.  It was the first dka record that made an enormous impact on me and  the one that led me into the rest.

11. THE HARDER THEY COME: Jimmy Cliff
CARL: Going to see this film late-night when I was young was  fantastic. We’d have nicked a bottle of vodka from somewhere, had a load of spliff and would sit there marvelling at the music and what  the music business was like in Jamaica. Years later when we worked with Rico, he’d tell us stories that would make us think that The  Harder They Come was actually true to life.
CHRIS: We do this ourselves from time to time.

12. KANSAS CITY:   Laurel Aitken
CARL: This was a cover of the R&B number, and it shows how close ska  and R&B are as there is so little structural change. The song just  seems to get a bit of a lift in the ska version.

13/14/15. MADNESS/AL CAPONE/GHOST DANCE: Prince Buster
CARL: We took our name from one of these, it was just one of those  classic ska records that sums up the era for anybody that was there, while the others prove how cool ska could be. Together, the three of  them show that there was always more to ska than people thought. It  was really versatile music: Al Capone is that frantic pace everybody  knows – Our One step Beyond tries to get close to that – whereas  Madness is more mid-tempo, far more subtle without losing any of the  excitement. Ghost Dance was the B-side to sit down and cry by the  sweethearts and is practically for slow dancing. Prince Buster means a lot to us: The Prince was our tribute to him.

16. BLOOD AND FIRE:   Niney
CARL: This may a bit too late for this compilation, but it fits late  because it’s so simple. It’s fantastic! There’s practically nothing  going on, just the same chords and virtually the same ‘blood and  fire’ lyric , but it’s so powerful. It sums up so much of what reggae  and ska is all about.

17. BONANZA: Carlos Malcom and The Afro Jamaician Rhythms
CHRIS: There were so many versions of the Bonanza theme tune, as it was  by far the most popular TV show back then, but this one was purely  instrumental, except for a lot of horses neighing in it.

18. STAR TREK:  The Vulcans
CHRIS: There were a lot of this type of record out in the late  1960s/early 1970s when the synth had hit reggae in a big way and  space themes became big business – UFO was another huge hit. It’s  also a reminder what a sense of fun reggae had back then, when they  cover the Star Trek theme and know that they are having a laugh  with it when they put it to a reggae beat. It just couldn’t leave you  feeling serious.

19. PIED PIPER: Bob & Marcia
CARL: This is a great example of why reggae opened up so wide in the  early ’70s, because Trojan were taking tunes like this (good strong  reggae tunes) and adding the strings. It wasn’t enough to change the  vibe of the record, but it meant it was so much easier for the radio  and record buyers over here to deal with. Because the record was so  good to start off with it created some good pop tunes.
CHRIS:  We can’t have too many Trojan records on here, because they  brought the English pop sensibilities to reggae and that was what got  it over here to a large audience.

19. WET DREAM: Max Romeo
CHRIS: I remember the first time I head that, it was playing  through a speaker outside a record shop, just over and over again.  Because it was banned on the radio this was the only way the kid s were going to hear it, so they’d stand outside listening and  laughing. It was still a hit, but that has as much to do with it being  a really good record.

21. UNDER MI SLENG TENG: Wayne Smith
CARL: This is about as modern as we’re going to get. Although this  was the one that precipitated the whole digital reggae revolution,  it’s got a lot of the old sensibilities about it. Although it’s  simple, it’s still powerful – it’s a strong enough rhythm to be  versioned countless times yet still sound fresh and has a bounce and  sense of fun about it that so many of the other recent records lack.  It’s about weed, not AK-47s, so it fits in well here.